In case you haven’t noticed, the CPS and EMR demo systems have pretty easy default passwords. Oddly, if an account gets locked or the password expires, there isn’t an easy way to get a password less than 6 characters into the user management system.

You don’t have to be able to decode the passwords in the DoctorFacility table to set the password of a user. The following statement will set hwinston’s password to ‘asdf’

The Blackbird Content Framework works best when using the latest version of IE on your workstation.

Meanwhile, CPS requires version 9 or greater to run.  Unfortunately, the CPS application doesn’t seem to know that 11 is greater than 9.

As a result, you may see this message when starting CPS:

The workaround, is to tell CPS that the version of IE it is using is older than IE 11. To do so, click on the gear icon in the IE address bar; select “Compatibility View settings”.

After opening the Compatibility View Settings Dialog, add localhost, or the host name or IP address of the server that you are using to launch CPS. 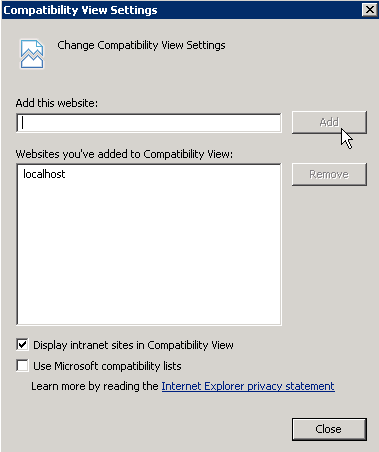 Unfortunately, this must be done on a per-user basis. At any rate, after updating this setting, all should be well.

As a Centricity content developer, I sometimes find myself in a situation where a Centricity document is in a state that will not allow it to be opened again. These documents are sometimes called dead documents. If they they cause the chart to not behave properly or cause CPS or EMR to crash when opened, I have heard the term “Poison Documents”

So these steps will remedy the situation:

Once you have found the document, you can make changes to the database to fix it. One thing you might need to do, depending on what the behavior is in the document, is to neutralize bad acting MEL code that is part of the update. Do this by changing HOLDTEXT and NOTETEXT so that it contains short, vanilla RTF.

The next thing to do is to eliminate the locks on the document which you will need to do to open it back up in the Centricity application so that you can end the update.

And there you have it.

In certain instances, you may find that theere is a defect in LinkLogic, or you may have another reason for doing this, but for what it’s worth, there may come a time when you need to insert a row into a Centricity database that has a unique ID field.

I have taken the second approach so that you can see the logic of the full procedure.